Wendy and Martin are the owners of the live music bar Outlaws in Playa de Mogan. 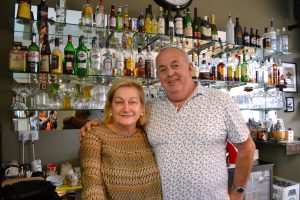 Before they moved over to the island of Gran Canaria, they have spend many holidays in Puerto Rico. Like many others they loved the place and decided to move and make a living on the island. They both are passionate of singing, music and having contact with the people.

They moved over in the year 2013 and opened their own bar in Puerto Rico.

The bar became really sucessfull and it was hard work. Wendy still owned her own business in London and was not always there in the beginning. After Martin having a heart attack on Christmas eve in 2016, they decided to take a step back. The Puerto Rico nightlife goes on till the late or early hours and the night life in Mogan ends earlier.

They had found a empty local in the Shopping Centre Plaza in Mogan and started to built Outlaws at this beautiful village. Sold the bar in Puerto Rico and opened in November 23rd 2017.

They have the best beer in Mogan, Alhambra – Carling. Stowford press cider.

They are open every evening with live music and singing.